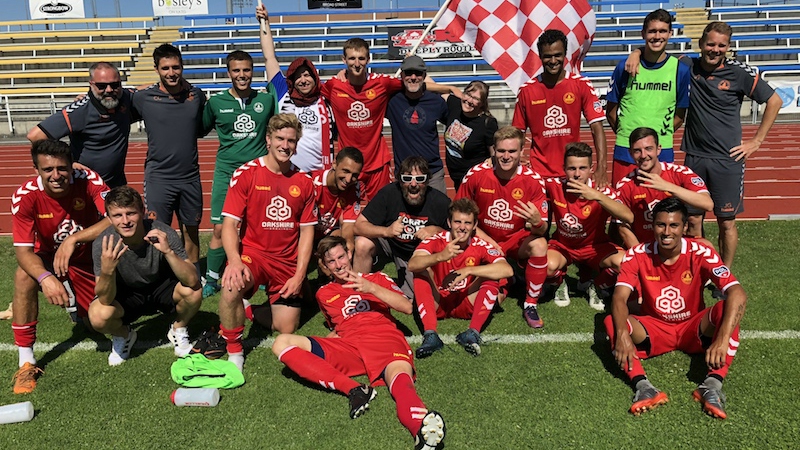 Lane United FC finished off their 2018 league campaign in style Saturday, beating the Victoria Highlanders 4-0 in Canada. Results elsewhere during the week meant that Seattle Sounders U-23 had taken up an unassailable second-place position in the USL PDL Northwest Division, but the Reds entered the match knowing that a draw would be sufficient to edge out TSS Rovers FC for third place. They did one better than that, though, going ahead through Gerard Hernando in the 24th minute and holding off the Highlanders comfortably thereafter, before a ten-minute blitz in the middle of the second half added another three goals to the scoreline. “I’m very proud of these young men. We traveled with 14 players, with nothing to play for with regard to playoffs, and the boys showed up and put in a great shift, took all three points, and ended the season on a high note,” said a delighted head coach John Galas.

Lane United are a team who look comfortable in possession against most opponents, and that effect was even more pronounced as the match kicked off in balmy conditions on the pristine natural grass of Victoria’s Centennial Stadium. After weathering a few early storms and surviving a penalty shout from the Reds’ Sam Engle, the Highlanders conceded the first goal of the match after 24 minutes when Nick Moon—one of Lane United’s outstanding performers on the day and on the season—hounded defender Peter Schaale out of possession as he looked to play back to his own keeper, Ty Venhola. Moon carried the ball into the area himself and when Venhola charged out to meet him near the endline, squared an unselfish pass to Hernando to tap in in between his marker and the stranded keeper.

Victoria seemed to carry very little threat going forward,  and while Moon and his strike partner Engle should have scored several more times before the first half was over, the midfield trio of Hernando, Sergio Diaz, and Willie Spurr did an excellent job of keeping the supply lines open. Unfortunately, wasteful finishing from Engle and uncertain last-minute decision-making from Moon doomed several promising attacks.

In the 34th minute, Victoria could have easily pulled back an equalizer with their one clear chance of the match, but the fullback Jonas Smith chunked a tame open shot straight at the Lane United goalkeeper, R.J. Noll, from 10 yards out. That defensive lapse notwithstanding, the Reds continued to control possession and tempo after the halftime interval, and twenty minutes into the second period the floodgates opened when Diaz scored at the end of a brilliant team move. Moon, Willie Spurr and Engle’s triangular combinations down the right side bamboozled the Victoria back line and led to Engle swinging in an uncontested cross that was only half cleared to Charlie Spurr on the left side of the box. A shot could have been on, but left-back picked his head up to volley a layoff to his brother Willie Spurr at the penalty spot, who unselfishly cushioned a knockdown into the path of Diaz who hit a neat half-volley past an exposed Venhola.

The unselfishness and cohesion that had bred the second goal quickly created a third, two minutes later: the Reds applied a tenacious team press high up the pitch and one loose touch from Victoria’s Thomas Shores allowed Hernando to snap in and knock a hopeful ball forward to an unmarked Moon who made no mistake and finished with a comfortable dink over the onrushing Venhola. There was time after that goal for Engle to blaze another gilt-edged chance over the bar before, in the 74th minute,  Moon would win a penalty going over the outstretched leg of Jonah Smith at the left edge of the Victoria penalty area. The Milwaukee man buried the ensuing spot-kick low to the right for his second goal of the afternoon.

Not content with two goals and an assist, Moon then went for his Gordie Howe hat trick as the match ticked into its final ten minutes, getting involved in an altercation that started when Matthias Binder had been deliberately and cynically fouled by Victoria’s Marcus Campanile. Moon would receive a yellow card for his role in the ensuing mass confrontation, while Campanile and Binder were both sent off. With both sides down a man, Victoria nearly stole a goal late with a long ball over the top finding substitute, and storied veteran Blair Sturrock in his final appearance for the Victoria side, who knocked the ball past the on-rushing Noll only for the Reds center-half Andrew Boyd to produce a spectacular goal-line clearance. “Finishing third in this division is certainly something to be very proud of. Year in, year out, this club continues to improve in all areas. These boys represented the club with class and professionalism all season long, and they should be proud of earning the most points, the most goals scored, the best goal differential, and the highest position in the division in LUFC history,” said Galas. “Overall they played some wonderful soccer all season long, they were a pleasure to coach and lead this season, and I hope we made the fans proud.”