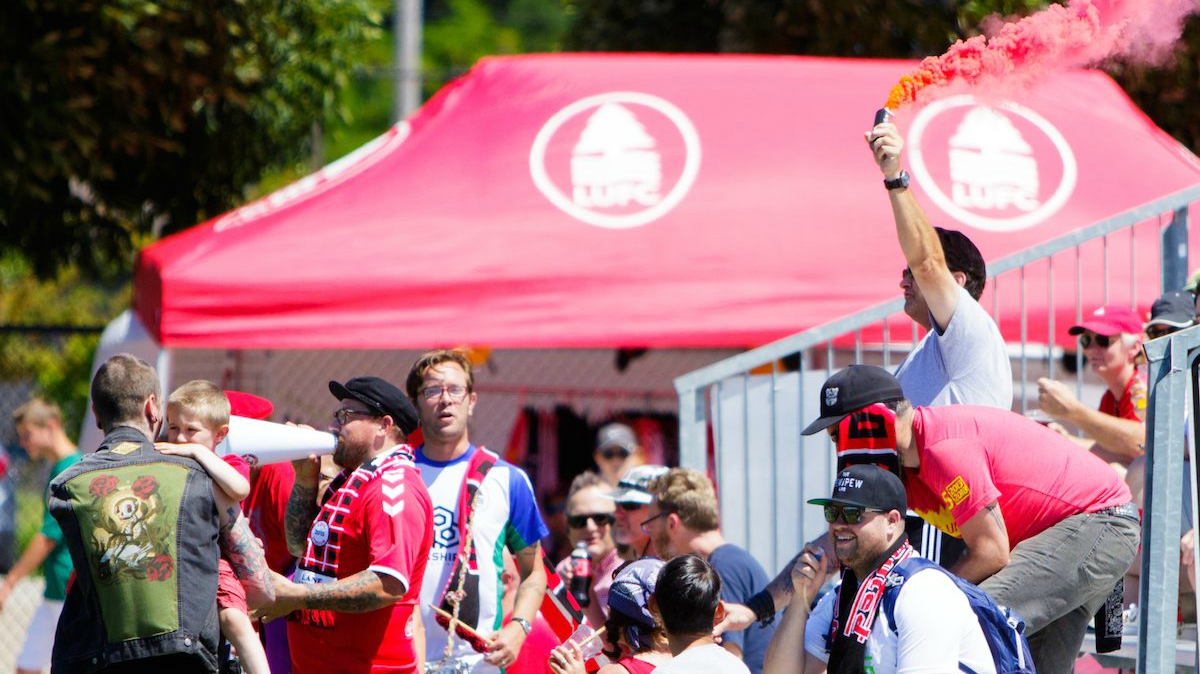 Lane United FC edged out the visiting TSS FC Rovers 2-1 on Sunday afternoon to regain ground in the race for a playoff spot in the USL PDL Northwest Division. Rebounding from the heavy 4-0 loss incurred to Calgary Foothills FC, on Friday night, the Reds looked much more comfortable on this day as they possessed the ball confidently and had a clear edge in the number of chances created. Willie Spurr enjoyed another standout performance for the Reds in the creative midfield role and it was his assist to his brother Charlie, playing in a wide attacking role, that opened the scoring in the 30th minute before center-half Drew Boyd found the ball at his feet in the TSS box midway through the second half and slotted home Lane United’s second. The visiting Rovers failed to create many scoring opportunities throughout, but nonetheless clawed a goal back in the 89th minute through their best player on the day, Daniel Sagno, but were unable to pinch an equalizer in stoppage time.

The Reds fielded a strong lineup to start the match and the lively trio of Nick Moon, Willie Spurr, and Sergio Diaz showed no ill effects from the match that had concluded less than 48 hours earlier against Calgary. It was this trio, often combining with the tireless and crafty Anthony Macchione down the right wing, that looked irresistible at times throughout the first half, combining easily and often leaving the Rovers back line looking somewhat exposed. The goal after half an hour was a clinic in one-touch passing, as Diaz’ entry pass to Macchione was cleverly flicked to Willie Spurr, who was able to prod the ball forward to his brother Charlie, by this point startlingly unmarked in the TSS box. With the back line completely taken out of position, the Macalester College man took a touch to settle and placed a low left-footed shot into the bottom corner of Mario Gerges’ net for a deserved 1-0 lead, an advantage which never looked threatened for the remainder of the first half.

Gerges’ name would be called often throughout the second period, as he put on a stellar performance that served to keep the contest close. Moon on two occasions was denied by the Rovers’ keeper from point-blank range, as was the substitute Gerard Hernando later on in the half once the Reds had already doubled their advantage. That goal came from central defender Drew Boyd, who, after venturing into the opposition box for a corner kick, stuck around long enough to receive a cross from Moon, who had overpowered his marker while dribbling in from the right wing. Boyd’s first touch actually led to Willie Spurr having a crack at goal from fifteen yards which was blocked, but the big center-half was on hand to stab home the rebound to make the score 2-0. The Rovers bench and several of their players protested loudly about Moon’s brusque method of riding the challenge that freed him up for the initial delivery into the box, but center referee Isaiah Vlad was unmoved.

The match could easily have been tied at 1-1 just after halftime, had the Reds backline not produced an improbable series of blocks in a goalmouth scramble, culminated by holding-mid-turned-left-back Jose Benavides’ goal line block of Daniel Sagno’s shot from a yard out. It was certainly the most promising of the Rovers’ few chances to score all afternoon. Sagno, who carried the main threat for the visitors, did bag a goal toward the end of the contest, making an incisive diagonal run into the Lane United box that was spotted by Matteo Polisi, who lofted a ball over the top; Sagno then did excellently to settle the ball and despite being channeled away from goal on the right side of the penalty area, turned a low half-volley back across goal to tuck it inside the far post just out of Paul Kruse’s sprawling grasp. TSS threw everything forward in the final minute plus stoppage time, but unfortunately for the Canadians that fine effort from Sagno was too little, too late, and they leave having only picked up one point from three matches on the season against their closest divisional rivals.

The win now puts Lane United level with TSS on points but well ahead on goal differential for the third spot in the division, one point behind Seattle in second. TSS host the second-place Sounders FC U23s on July 11, with Seattle then moving on to play in Calgary, while Lane United travel to face the Victoria Highlanders next Saturday, July 14 with all to play for in this incredibly tight race for second in the PDL Northwest Division.