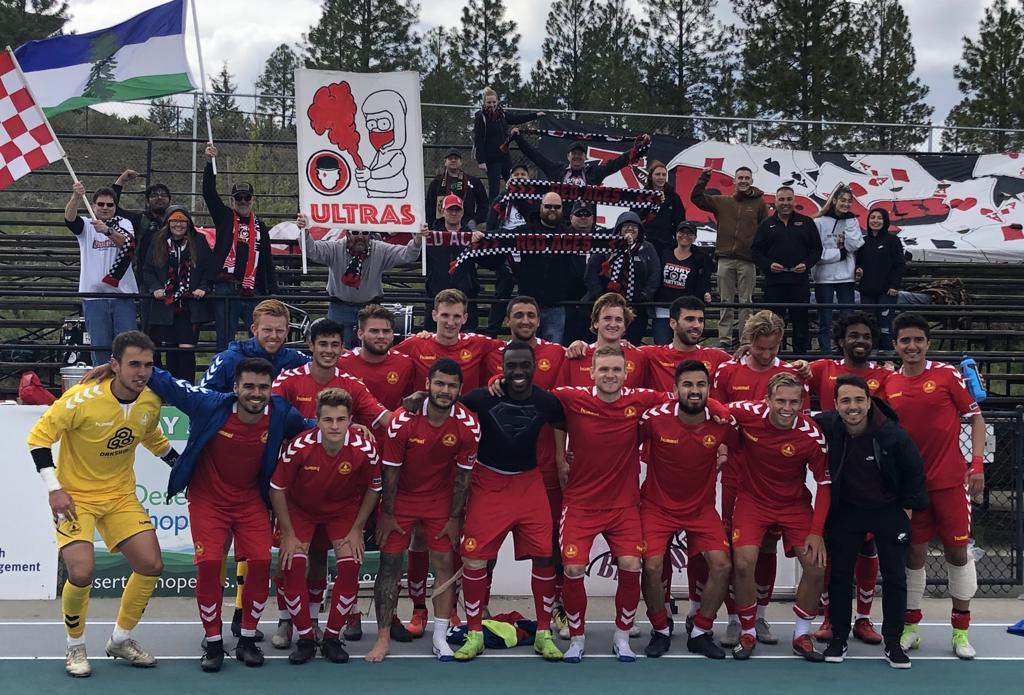 Lane United faced off against the Portland Timbers U23 in both clubs' fourth game of the 2019 USL League Two season yesterday in Bend, OR. The 3-1 victory came after Lane United started the season with two draws and a loss over the first two weekends of the season.

The opener in Victoria saw the Reds start a bit slowly, but grow more and more into the game. A mental lapse on defense afforded the Highlanders a clear look at goal early on, which they did not hesitate to take advantage of, dispatching a well placed shot past a stranded Albert Escuin in the LUFC net. The goal served as a wake up call to the Reds who started to assert themselves more and more as the game went on. In the second half, Charlie Spurr took advantage of a miscommunication between the Highlanders' center back and keeper on a long bouncing ball to pass into an empty net, but on the balance of play no one could say it was undeserved.

The Reds did survive a late scare giving up a penalty, but Man of the Match Escuin read the taker's intentions, blocked the shot, and assured the rebound was pushed wide of the onrushing attackers. While the Reds enjoyed the better of the attacking play, an impressively positive Highlanders team never made it easy, and in light of the penalty opportunity, neither side could begrudge the draw in the end.

Less than 48 hours later, Lane United took the field at a lush, and under-mowed Swangard Stadium. This time the Reds wasted no time in getting going, having a ball cleared off the line, hitting the crossbar, and failing to hit the net from close range. The Reds easily could have enjoyed a 3-0 lead early on.

The tireless Rovers didn't give up though, and when LUFC midfield maestro Soren Jensen went down with a knee injury after 15 minutes, the tides began to shift. Slow play, unforced errors, and under hit passes (in no part aided by the long grass) all contributed to TSS deservedly coming out of the following hour or so with a 2-0 lead. The last 10-15 minutes saw the Reds respond with a bit of urgency, but TSS wouldn't break on this day and the scoreline stood to the final whistle.

Last weekend, the Reds continued their early season road campaign with a trip to Sumner, WA to take on the Sounders U-23s in a Sunday afternoon kickoff. A mental lapse once again proved costly early on with the Sounders scoring in under 9 minutes when a quickly-taken free kick turned corner was flicked from near to far post for an unmarked Sounder to knock home with ease. The Reds' play improved as the game went on and they enjoyed the most success so far this season attacking the middle of the opponents' defense. This caused the Sounders shape to collapse and afforded the outside backs Jordan Lane and Brannon Romac all kinds of space to exploit down the flanks.

Lane United finally got their goal through Man of the Match Romac bombing down the right, skipping past his defender, and being dragged down in the box as he was winding up for a shot. Alex Segovia stepped up to the spot and was alert enough to follow his initial shot, which was blocked, and bring the Reds even in the second half. The Reds once again flirted with disaster late, giving up a penalty, but for the second time in as many starts, Albert Escuin proved too much in goal, saving another penalty to preserve the road point.

Yesterday afternoon, the Reds faced the 2017 NW Division Champion Timbers U23s who were coming off a third consecutive shutout loss. Last weekend, the Timbers went on their own Canadian road trip, falling 5-0 to TSS and 2-0 to the Highlanders. This past Friday they returned home to face the Sounders U-23s and went down 4-0 after a three-goal first half from the Sounders.

This outing on a gray afternoon in Bend, OR would prove no better for the Timbers, though they did go in even at the half. In a matchup where the Reds controlled the midfield for long stretches of the match, the Timbers were determined press high and disrupt the flow of the game. The Reds were up for the challenge though, and with Demar Rose putting in a solid shift from his holding-midfielder role, the attacking four had good success creating chances with former Timber Alejandro Segovia asking a lot of questions down the Portland left flank and Sergio Diaz causing all sorts of problems cutting in form his wide-right attacking midfield role.

The deadlock was nearly broken in the opening 15 minutes off a near post corner. New addition Francesco Tiozzo got in front of everyone from his centerback position and crashed a volley off the post from short range. The Reds finally got heir goal ten minutes later when LUFC attacked again down the right, this time with fullback Brannon Romac getting involved. The ensuing cross was not sufficiently cleared, and when Christopher Kalla found the ball at his feet under the shadow if the crossbar, he rolled it back to the penalty spot for Diaz to calmly slot home.

The Reds looked to be cruising into half with the lead when one of the silly free kicks LUFC gave away was dispatched toward goal. When what should have been as easy tip over from Keeper Albert Escuin turned into an uncharacteristic error by tipping on to the crossbar and back into play, a bit of chaos resulted in the ball being poked into the Reds' net from short range and the match went into halftime knotted at one apiece.

The Reds maintained their midfield dominance in the second half in spite of Timbers substitute after substitute coming on to continue the high press with fresh legs. With halftime instruction to continue shooting and to follow up shots looking for rebounds, Lane United once again took the lead in the 65th minute with Man of the Match Sergio Diaz whipping in a vicious shot after dribbling inside past three or four Timbers defenders. The shot couldn’t be held and dropped kindly for the on-rushing Segovia to cooly finish into the far post side net against his old club.

The Reds weren’t done yet, and when an energetic run from fullback Jordan Lane down the left past a number of defenders resulted in a short cross into traffic, the ball fell to substitute Charlie Spurr who took his time to choose his spot and punched it home with the stranded Timbers keeper already down.

One last bit of excitement played out in front of the raucous traveling Red Aces, after a questionable penalty was awarded to the Timbers when substitute Joey Bajza stood his ground against a dribbling attacker for the ball to pop up and strike his hand by his side. Never a case of hand-to-ball, the penalty was nonetheless awarded. A nervy final five minutes wasn’t to be, however, with Albert Escuin coming up with an astonishing third penalty save of the young campaign.

The 3-1 win puts the Reds fourth in the NW Division on 5 points after 4 games heading into their home opener Friday night at 7pm at Marist High School against the Sounders U-23.