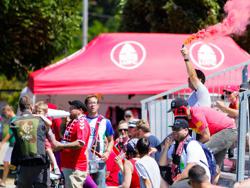 Lane United FC’s supporters’ group is The Red Aces, currently comprised of over 150 fans who have signed on to support the club. The group retains an ownership stake in Lane United FC and has its own officers’ board that liaises with the club. By paying an annual fee, members receive voting rights on all aspects of fan experience, priority access to tickets and ticket packages, and a variety of other perks and discounts.

The Red Aces have been a very audible and visible fixture at LUFC home matches, and at matches on the road, since Lane United’s inaugural season in 2014. Our hope is that the fan club will come to represent the full spectrum of support: from individuals who simply want to rally around a community team to hard-core, flag-waving, chanting soccer enthusiasts.

Interested in becoming a member? Try joining the Red Aces’ Facebook page. Then check out the Red Aces’ website, where you can purchase a membership and read more about what it means to be a part of the LUFC community.